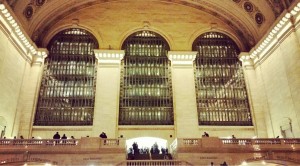 I was sitting, waiting for my train in Penn Station, remembering the last time I sat waiting for a train in Penn Station. Usually when memories like this come at me, I chase them away and I chase well.  Last time, I had just gotten really bad news, the worst kind of news, but it was more than that.  I shared a few days with some of my favorite people in the world and their world was changing. It has never been the same since and never will be. I sat in a corner chair and cried my face off. Yes I was the crazy lady crying in the train station (Note: Grand Central is shown, not Penn.)

That was a little over four years ago. If I am honest with myself, I have to admit that I went a little dull after that. I couldn’t quite get at the range of emotions I used to have. If the range was a one (misery) to ten (joy), I lived in the four to six zone. Not miserable, but not joyful either. Colors lost their luster. My musical interests closed in, and I probably listened to the same five bands over and over again, for three years. I essentially stopped reading. I wasn’t noticeably different, but I was different.

I’ve talked a lot about the visceral impact writing had on me when I started in February. At risk of repeating myself, I’ll say that it was actually a little disturbing. I stopped eating and sleeping and I felt buzzed 24 hours a day. I was writing thousands of words a day and I couldn’t stop. I could feel everything. Every word that went through me came from a depth that I can’t even explain. But it made me laugh and cry and afraid and unbelievably exhilarated. Less than a week in, I was strongly encouraged to get blood work. There may have been whispers of a nervous breakdown behind my back.

After about a month, the frenetic energy leveled off, but the rest stayed. The access stayed. Now the light is so bright that I can see the rays.  I can listen to a guitar solo seventeen times over and go back for an eighteenth, because the magic is real. It was

there the whole time, but I couldn’t get at it. Every sense is powerful and alive and I feel… awake.  This must be what heroin feels like.

When I wrote Circling, I chose some of my favorite locations for inspiration – North Carolina beaches, Charleston and Savannah. Before I started Forever Falling I had an urge to get to Asheville, NC. I had never been, but I just knew my characters were there so I went in July. My characters were indeed there. Book Three, untitled for now, will be set in New York City, primarily Brooklyn. I am just now taking the train away from New York. I spent an amazing few days there and yesterday I explored Brooklyn.

I was a little freaked out getting myself from Midtown Manhattan to Brooklyn. I have no idea how the subway system works (or do they say trains here) and I wanted to stay above ground to see the bridges. I can’t figure out busses to save my life.  I ended up taking a cab which cost a third of what I had guessed it would. I saw everything I wanted to see, the hospital (main character is a doc), Gloria’s West Indies Restaurant (thank to Anthony Bourdain for the tip), and walked miles and miles of sidewalk. Getting out of Brooklyn was an adventure of its own. Guess what, cabbies won’t go into Manhattan at the end of the day.  It wasn’t the end to the day I wou 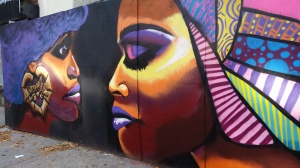 ld have chosen, but it was an experience all its own.

At one point I saw a park near the hospital, potentially really good setting material.  In my area back home, I don’t wander into parks much, alone on a weekday.  I decided to do it anyway and tentatively climbed a hill with no idea what awaited me on the other side. (Note: since I’m a writer my options were pretty much Ted Bundy, white slavery or gang rape). What I found was something very different, but you’ll have to wait for Book Three to read about it. 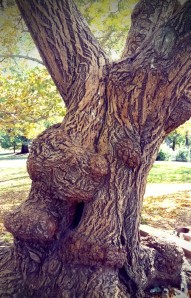 As I stood on that hilltop I wanted to drop to my knees and kiss the ground. (Note: I did not).  The warm air, the golden leaves, the filtered light, the singing birds, the poetic trees, the laughing hot dog vendors, the curious children, the view below me, the enormous blue skies above, steam billowing in the distance … it was all mine. It’s mine because I can reach it now, or more likely, it can reach me.

Here’s to being grateful for every day of this life.  Not everyone gets it and it is an extraordinary honor. Don’t miss a moment.